The DHR has a new Director who started on Oct 28th.

He is 39 year old Priyanshu a graduate Mechanical Engineer who joined Indian Railways in 2012.

Priyanshu is both his given and family name.

He was born and brought up in Bokaro Steel City in the state of Jharkand where his father is a
senior manager at the steel works owned by the Steel Authority of India.

He was selected by his school to sit for the prestigious Indian Railways Special Class
Apprenticeship exam. He came out top in his year and started his railway career at Jamalpur
workshop in 2012.
The 4 year apprenticeship comprised practical engineering and management training with a Bachelors degree in Mechanical Engineering.

This qualified him for his first posting in 2017 as Assistant Mechanical Engineer at NJP where he was in charge of a coach maintenance depot, a wagon maintenance depot and was also the boss of 400 drivers and driver’s assistants.

His most recent role has been as the manager of Siliguri DMU depot.

On several occasions he has accompanied senior officers making inspection tours of the DHR and found it very interesting.
He suspects that this interest was noticed with the result that he has  been posted as Director DHR.

He tells me that he is very pleased and excited to have the opportunity.
He has welcomed greatly the assistance that our Society, mainly through David Mead, is giving.

He lives in Siliguri with his lawyer wife although he will spend part of each week staying
in the newly converted accommodation at Elysia Place, Kurseong, which will also be his office. Kurseong is well placed for him to travel both to Tindharia and Darjeeling which is increasingly becoming the centre of operation for the DHR as more steam “Joy Trains” will be laid on for the rapidly growing number of domestic tourists.

We should rejoice that the DHR has an enthusiastic and energetic young man,
strongly supported by his boss the Divisional Railway Manager, Col Suvendu Choudhury. 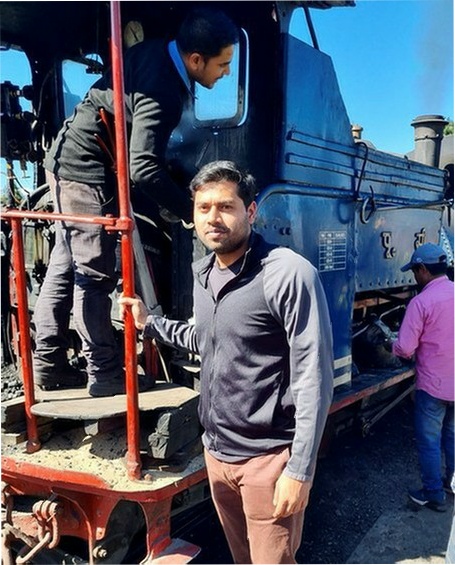